To be used in U.S. Army Safety Presentation Overseas

Great Lakes, USA – The Great Lakes Surf Rescue Project (GLSRP) is proud to announce that its “Signs of Drowning” illustration has been requested for use in a Summer Safety Stand-down briefing for Soldiers in Germany.

“This is a fantastic display to educate people on the signs of drowning,” said SGT John Hampton, Safety NCO at the U.S. Army Health Clinic Wiesbaden, Clay Kaserne, Wiesbaden, Germany. 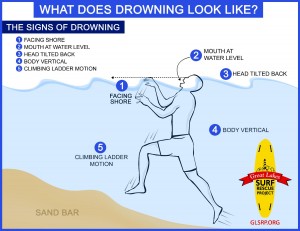 “Drowning is a respirator emergency and every moment under water is crucial,” said Dave Benjamin, GLSRP Executive Director. “Time is of the essence.”

The GLSRP wants everyone to know the Signs of Drowning because every second counts:

HISTORY – The Signs of Drowning, also known as the Instinctive Drowning Response was created by Francesco A. Pia, Ph.D.  It’s what people do to avoid actual or perceived suffocation in the water. And it does not look like most people expect. Unfortunately Hollywood has taught us what drowning doesn’t look like.  With actual drowning there is very little splashing, no waving, and no yelling or calls for help of any kind.