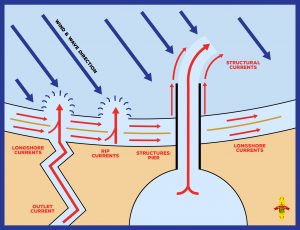 RIP CURRENTS
Rip currents can occur at any beach with breaking waves. Waves push water over sandbars toward shore and then that water has to go back out. Water seeks the path of least resistance. When a cut in a sandbar appears, water starts to flow out, pulling more sand with it, creating a deeper channel in the sandbar. Rip currents initially pull away from shore, but may curl and pull parallel to shore once it’s past the sandbar. There are also several other dangerous currents that may combine with rip currents (e.g. flash rips, long-shore currents, structural rips, and offshore winds.) 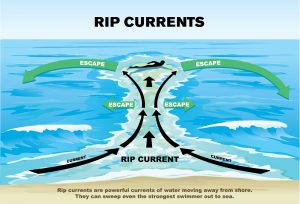 FLASH RIPS
Flash rips can appear and re-appear at different locations along the beach, usually during high energy wave conditions. These wave conditions are also called ‘blown out’ wave conditions because the surf is chopped up and torn by strong on-shore winds. When the waves are blown out, they are generally slashed and rippled, creating no discernible breaking pattern (like a washing machine). Flash rips also occur when wave conditions increase suddenly, or during storms, when the water level rises suddenly causing a temporary rip current. 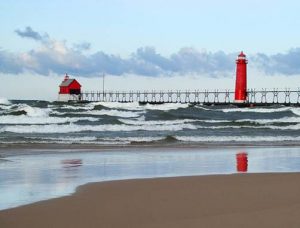 LONGSHORE CURRENTS
A longshore current is a current that moves parallel to shore. Longshore currents are caused by winds and waves hitting the shoreline at an angle and pushing water down the length of the beach in one direction. Lonshore currents can feed swimmers into outlet currents, rip currents, and structural currents along piers, jetties, and other hazardous areas. In many cases, the longshore current is strong enough to prevent swimmers from being able to keep their feet on the bottom, making it difficult to return to shore. If you try to swim parallel to shore to escape it and you don’t float to asses which way the current is pulling, you will have a 50/50 chance of swimming against the current and drowning OR with the current and escaping. 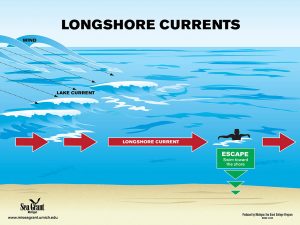 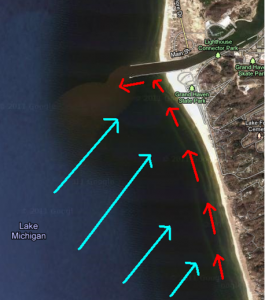 (Longshore current which then turns into a structural current)

Looking at all of the 256 incidents on Lake Michigan from 2002-2011, 66% of the cases occurred on a beach with a shoreline structure. That is why it is important not to swim along piers or break walls, because even during seemingly benign conditions structural currents can still exist. 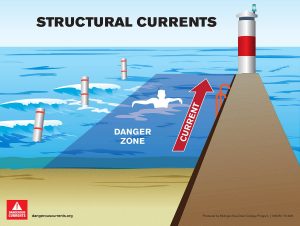 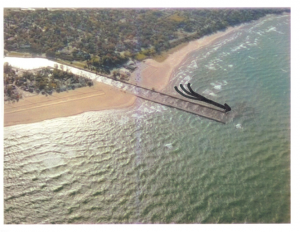 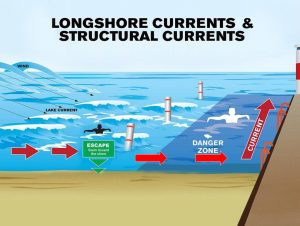 OUTLET CURRENTS
A current of water that flows into the Great Lakes from a river, creek, or boat channel. 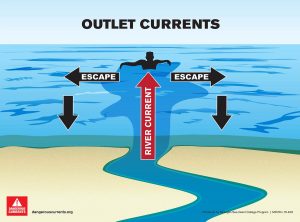 SEICHES
A seiche (pronounced “saysh”) is a sudden fluctuation of water levels on a lake or inland sea. The Great Lakes are among the few regions in the world where these potentially deadly events occur. The simplest definition of a seiche is water sloshing back and forth in a basin; a motion that sometimes resembles a tidal wave. When strong winds or pressure differences move across the lake, they cause a buildup of water on one end of the lake. As the influencing system leaves (such as thunderstorms, strong cold fronts, etc.), the water will slosh back to the other side, and continue sloshing until it reaches equilibrium. The uneven distribution of water on the shore can cause rip current problems. 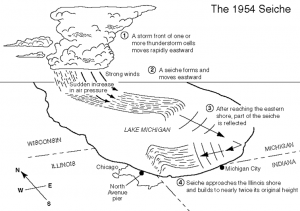 OFFSHORE WINDS
An offshore wind is a wind blowing from the land toward the water. Offshore winds can be deceptive and dangerous on the Great Lakes. Deceptive because the water may appear flat and calm at the shoreline, but the farther you get from shore, the offshore winds’ strength increases dramatically. 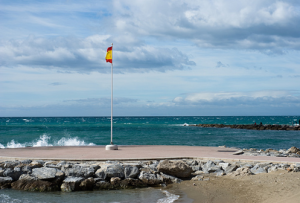 The winds can be especially dangerous for people on rafts, kayaks, standup paddleboards (SUPs), or other floatation devices because the floatation device may get caught in the wind, act like a sail, and be taken far offshore with its occupant.

Offshore winds can also be dangerous if the person is blown out to open water and the person falls off the floatation device and becomes separated. In strong offshore winds, a person can’t swim fast enough to catch the device caught in the wind. 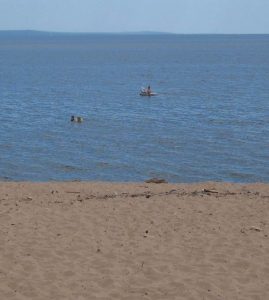 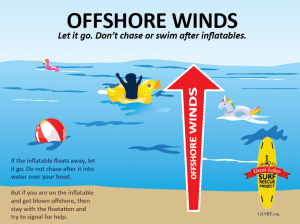 One of the most heart-wrenching offshore winds incidents occurred June 2010 when 9 year-old Sofia Khan went missing. She was in a kayak in Holland, WI and an offshore wind carried her out to open water. The girl’s father tried to swim out to the kayak, but strong winds pushed it farther and faster than he could swim. He was unable to catch up to it and had to swim back to shore. When the kayak was retrieved, it was empty. To this date, her body has not been recovered.

UPWELLING
Upwelling is a process by which offshore winds push warm surface water away from shore, allowing cold lake water to rise up to the surface from beneath. Upwelling on Lake Michigan can often surprise beachgoers who arrive at the beach to find very cold water temperatures. The onset of upwelling can occur very quickly, with lake temperatures falling 20 to 30 degrees. This is very important because cold water shock can cause a person to have a hyperventilating gasp reflex inhalation of water and thus drowning (especially if jumping off a pier).

KNOW HOW TO SURVIVE
Know the “Flip, Float, and Follow” Drowning Survival Strategy.

The Great Lakes Surf Rescue Project, Inc. (GLSRP) is a nonprofit corporation that is about saving lives.