Below is a compilation of GLSRP TV News Interviews

06/17/2016 – ABC 7 – Great Lakes Could See Record Number of Drownings this Year – CHICAGO (WLS) – Summer begins Monday, but already this year, 25 people have drowned in the Great Lakes. Three bodies were pulled out of Lake Michigan last weekend alone. To be added

06/16/2016 – The Weather Channel on Facebook Live – Drowning Survival Strategy: Flip, Float, and Follow; Drownings in the Great Lakes are ‘a neglected public health issue.’ One woman shares her story of loss and how quickly a drowning can happen. #GLSRP

06/09/2016 – Cleveland 19 News – An Ashtabula mom, Melissa Zirkle, has made it her life mission to keep children safe on the lake after her son died in a Lake Erie drowning accident.

05/28/2016 – WSBT 22 – Stay safe on Lake Michigan this summer – The summer swim season is right around the corner, so we asked Dave Benjamin — executive director of the Great Lakes Surf Rescue Project — to join us in the studio. It’s an organization committed to ending drowning on the Great Lakes. He has some tips to keep you safe.

“People think that there’s all kinds of waving and yelling and carrying on, when in fact the victim is pushing down on the water desperately attempting to keep their head above the water,” said Pratt.

05/17/2016 – WWMT – Flip, float, follow: surviving dangerous currents – FLIP over onto your back. FLOAT to keep your head above water, conserve your energy, and calm yourself down from fear and panic. FOLLOW the safest path out of the water. NOTE each drowning situation is going to be unique and Following the safest path out of the water may be hard to determine.  Continue Floating until Rescue Arrives.

But it’s not because of the reason you would think. “Males overestimate their ability, not just in swimming but in most things,” Pratt mentioned. Often times in pools especially when crowded, drowning is almost disguised and often not seen. “Once a victim goes underwater, in many cases they’re invisible,” said Pratt.

05/16/2016 – WLNS 6 – Water Safety Week – Kids learn to swim before they can walk. Bob Pratt is the director of education for Great Lakes Surf Rescue Project. He says drowning happens quicker than you think.” They portray drowning as this big, loud, long affair where there is waving and yelling. where there is three or four or five minutes where the person is in distress, when in actuality drowning happens almost suddenly, it happens very, very quickly…”

“What happens when you panic is your heart beats faster, you start breathing faster and as you’re hyperventilating you’re actually letting out more air then you’re taking in which makes you sink more. which is very unfortunate in a drowning situation because flotation is the key. if you relax and take a nice deep breath in, your chances of floating are much much greater.”

04/19/2016 – News Net 5 – Kayaker Pulled from Lake Erie – According to the Great Lakes Surf Rescue Project, eight people have been rescued in Lake Erie since Saturday.  Seven people were rescued Saturday when a distress call came in from a boat with two downed engines. The boat was taking on water about a mile northeast of Mouse Island.  The Great Lakes Water Safety Consortium is hosting a Great Lakes Water Safety Conference Tuesday from 8 a.m. to 4:30 p.m. at the Lake Erie Nature & Science Center, located at 28728 Wolf Road in Bay Village.

08/04/2015 – WSBT 22 – Ed Russo – Drownings spike in Lake Michigan over past three weeks – According to the Great Lakes Surf Rescue Project, Lake Michigan saw 24 drownings in 2014. Many of them occurred in the late summer months. This year, Lake Michigan has seen 11 drownings — 8 of which have occurred since July 11th. Most of them in the Chicago area.

07/25/2015 – ABC 7 Chicago – Family Mourning teen who drowned at 31st St. Beach – It was meant to be a fun family day out at the beach to celebrate a sibling’s birthday. Instead, a family is now mourning the loss of 17-year-old Eddie Horns, who drowned Friday night at 31st Street Beach. 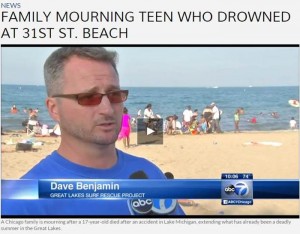 06/22/2014 – Wood TV 8 – A day after the most recent drowning, a West Michigan organization already happened to have a class scheduled aimed at preventing situations like this and teaching others how to help in a water emergency – Muskegon’s Great Lakes Water Safety Class.  [The coverage of the class starts at 00:29.]