As Great Lakes drownings continue to rise in 2017

The presentations will commence Monday, May 8, 8:00 a.m. at Richards High School, 10601 S. Central Avenue, Oak Lawn (additional classes listed below). These presentations come as the beaches begin to prepare for summer visitors and Great Lakes drownings continue to rise. 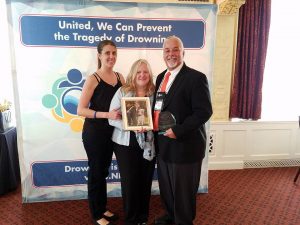 “Education is the key,” said John Kocher. “People are amazed when you explain to them about the dangers of water. They, like myself, had no idea.”

“As a society, we should all know the basics of water safety because drowning is a leading cause of accidental death in children,” said Kathy Kocher. “We need to educate children, parents, and everyone about water safety and drowning prevention.

“Water safety education is very straightforward. It should be part of every school’s curriculum, just like fire safety.  No one wants to think this could happen, but it does. We cannot bring our son Matthew back, but we are committed to teaching others about water safety so that no one else has to experience the devastating loss we have,” Kathy concluded.

“John and Kathy have been a true inspiration in the face of tragedy of losing Matthew,” said Dave Benjamin, GLSRP Executive Director.  “They have been unstoppable in their efforts to educate others to prevent drownings.” 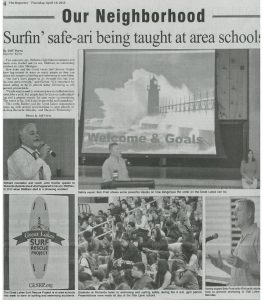 NDPA Lifesaver of the Year Award
John and Kathy Kocher of Tinley Park, IL received the National Drowning Prevention Alliance Lifesaver of the Year Award for their water safety advocacy after losing their only child, Matthew, in a 2013 Lake Michigan rip current.  The Kocher’s accepted the award April 12 at the NDPA conference in Pittsburgh, PA. (Amateur video of the Award Ceremony and Award Acceptance speech.)

ABOUT THE KOCHER’S
On July 27, 2013, John and Kathleen Gahan Kocher lost their 15 year old son, Matthew, to a Lake Michigan rip current in New Buffalo, MI.

In September 2014, John & Kathy attended the “Because I said I would” conference in Columbus, OH to advocate water safety and recorded this Promise Video, “Gentle Giant” (https://www.youtube.com/watch?v=h5SJlCK_a9g) recalling the day Matt perished and their future commitment to honor his memory through a foundation.

Since losing Matthew they have made a commitment to help others and have not stopped.

They created the Matthew Kocher Foundation (www.mk56.org) and work endlessly and unselfishly to help educate and promote water safety in the community to reduce and prevent loss of life.

IN ADDITION
On April 12, 2017 – John and Kathy Kocher received the National Drowning Prevention Alliance’s “Lifesaver of the Year Award” for their water safety advocacy after losing their son, Matthew, 15, in a Lake Michigan rip current

On December 17, 2016, John and Kathy received the Daughters of the American Revolution “Excellence in Community Service” award.

On April 28, 2016, John and Kathy Kocher, received the “2016 Supporter of the Year” award presented by the nonprofit, ‘Because I said I would’ for their video, “Gentle Giant”.

On April 22, 2016, John Kocher presented about the loss of his son, Matthew, during the “Story Telling” segment at the Great Lakes Water Safety Consortium Conference in Grand Haven, MI

On April 21, 2015 John Kocher presented about the loss of his son, Matthew, during the “Story Telling” segment at the Great Lakes Water Safety Conference in Michigan City, IN

In addition, since John & Kathy committed to advocate water safety, they have spoken to the media on at least 23 occasions to exponentially expand the water safety message.