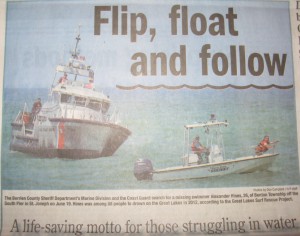 The Waterfront Safety Advisory Committee was created by a city mourning the Labor Day weekend drowning of teenager Tyler Buczek.  The beach safety measures intend to prevent a repeat of the tragedy that broke the collective heart of the community.

The presentations will also be part of the Kiwanis Club’s ‘Week of the Young Child’ program.  Although the club’s ‘Week of the Young Child’ is typically geared toward kids between the ages of 4 and 9, the surf rescue program is open to people of all ages and will be of particular value to middle and high school-age youths because they are the ones most likely to frequent beaches without adult supervision, said Beckie Perez, who is also a Kiwanis Club member.

“An ordered task like Flip, Float, and Follow can be an effective psychological tool that can be focused on in order to avoid panic in a terrifying situation,” said David Benjamin, GLSRP executive director.

“It is critical to understand what it means to flip, float and follow,” said Elizabeth LaPorte, Michigan Sea Grant’s Communication and Education Services Director.  “The Great Lakes Surf Rescue Project’s educational efforts will clearly demonstrate for the public how to survive a dangerous current.”

According to LaPorte, the Michigan Sea Grant’s “flip, float and follow” public outreach campaign is the result of input from a variety of first responders and water safety groups that participated in the Great Lakes Water Safety Conference, sponsored by Michigan Sea Grant in 2011.

How to use the Michigan Sea Grant’s “Flip, Float, and Follow” Rip Current Survival Strategy – If you are ever caught in a rip current or other Dangerous Currents:
1. FLIP:
Flip over onto your back and float.

REMEMBER:
–As long as you are floating, you are alive (*cold water hypothermia may set in within one hour, so know the 1-10-1 Rule of Hypothermia, especially in spring, fall, and winter.).
–As long as you are struggling or fighting the current, you are drowning – Conserve your energy and do not do the Signs of Drowning.  If you are too tired to swim to shore, continue floating and signal for help

“And the old rip current survival strategy, ‘Don’t panic swim parallel to shore’, may not always work. ‘Don’t panic’ is not a helpful instruction to alleviate panic, and swimming parallel may not always work because longshore currents run parallel to shore and structural currents run parallel to the structures (piers, jetties, and rock walls). It’s best to assess which way the current is pulling you before your risk swimming against it.”